The article has the aim to reveal the importance of hunting for the Lithuanian people’s everyday life in Southeastern region in the 13th – 14th centuries. This aim was achieved on the basis of the palaezoological data accumulated due to the archaeological researches of the bone relicts found in the archaeological monuments of Southeastern Lithuania. The article reveals that hunting was viewed differently by ordinary members of the community and the ruling elite. For the nobility, hunting, especially of big game, was a pleasant activity, and the hunted meat enriched their feasts. The commoners, however, used the meat of domesticated animals. European bison, aurochs, elks, and wild boars were among the most frequently hunted game. Beavers, as hunting objects, were also popular. In addition, some part of the population was obliged to hunt a certain amount of fur-bearing animals and to produce a certain amount of fur. The bones and horns were used by many craftsmen. Also, written sources give evidence about the existence of medieval hunting castles in Southeastern Lithuania. In this respect, the analysis of the data of palaezoological material gives some hope to locate one more of such hunting castles which could have been built on the mound of Bradeliškiai. 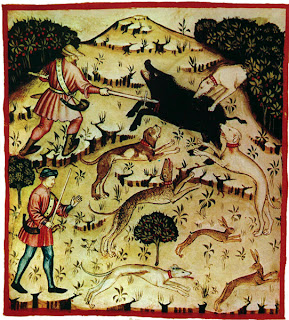 Hunting in the 13th–14th Centuries (on the research data in Southeastern Lithuania) In the article the author aims to investigate and review the importance of hunting to people’s everyday life in Southeastern Lithuania in the 13th–14th centuries. The investigation was carried out on the basis of the palezoological data of archaeological researches conducted in archeological monuments where bone relicts were discovered; written sources were also taken into consideration. Hunting, especially of large mammals, was a hobby, entertainment and privilege, first of all, of the ruling elite. Game meat offered some variety in the nobility’s cuisine. Commoners, on the other hand, used the meat of domesticated animals for their daily meals. The main source of meat for the majority of people, especially the commoners, was the produce of cattle-breeding. Hunting also provided supplies of furs, horns, bones as well as some substances used in medicine. We could claim, on the basis of the researched data, that a great deal of animal bones was found in the whereabouts of certain residencies such as Vilnius Lower Castle, Trakai Castle as well hunting castles, Punia, for example. Hunting castles, such as Punia, Rūdninkai, Varėna, Birštonas, are known to us from written sources. However, other archaeological monuments, i. e. Bradeliškiai mound, could be considered as a hunting castle because of a relatively massive amount of game bones. The most popular hunting game in Southeastern Lithuania in the 13th–14th centuries were aurochs, elks, deer, and wild boars. Beavers, as hunting objects, were also popular. Horse bones, discovered during archaeological researches, could hardly be attributed to the bones of domesticated animals as wild horses (tarpans) were hunted and used for food in the medieval Lithuania. Šaltinis: Mantvydas Vitkūnas. Medžioklė XIII - XIV a